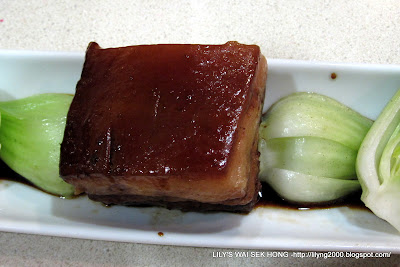 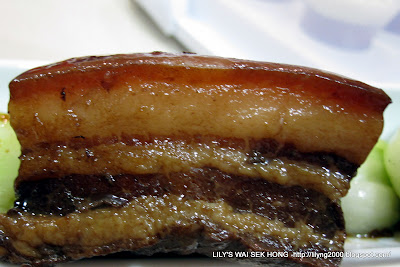 The dish is named after the revered Song Dynasty poet, artist and calligrapher Su Dongpo. The meat which is a slab of pork belly which has to be extraordinarily fatty (around a 50-50 fat-meat ratio), and thus extraordinarily flavorful. A good Dongpo rou is not greasy, but rather melts on the tongue. and it is so tender due to the lengthy cooking time (3-1/2 hours) that you can quite easily pry it away in small pieces with chopsticks. A pressure cooker shortened the cooking time tremendously. 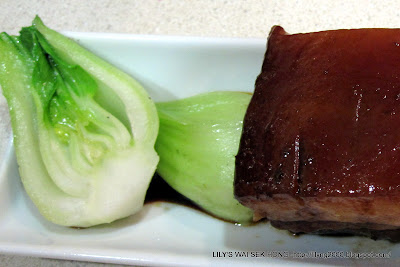 We should join the Hangzhou people of "Su Dongpo's' era and cook this dish in honor of him. 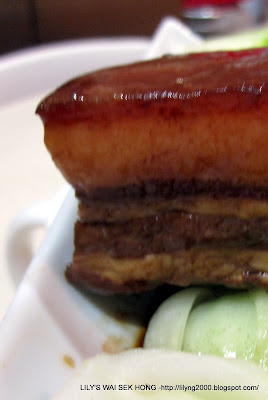 This is my version of the popular dish "Dongpo Rou" 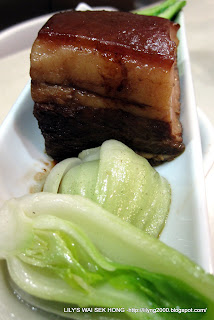 Tie the pork with the banana strip, like a parcel and blanch the pork in the boiling water with the ginger slices and spring onions. Remove and rinsing under cold water. (this is to ensure that the pork will remain intact)

Place the pork peices into the pressure cooker, skin side up and add in the 2 cups Mother Sauce. If the sauce is not enough to cover the pork, top up with water.

Pressurized the pork for 1/2 hour. Release pressure before opening the lid of the pressure cooker.

Check the pork for doneness by pricking the meat with a paring knife. It should be tender and soft enough to allow the knife to cut through without resistence.

Remove pork and put them in a large bowl. Sprinkle in 1/2 cup of Shaoxing wine and let pork steep in it for 30 minutes..

To make the suace:

Take 1/2 cup of sauce from the pressure cooker and put into the gravy separator, tip the sauce into a saucepan and discard the fat.

Add the Shaoxing wine that was used to steep the pork, to the sauce and cook until it thickens. Adjust the taste to your liking.  Pour the sauce over the pork pieces and steam it before serving, so that it can be served warm. Remove banana strips and discard. 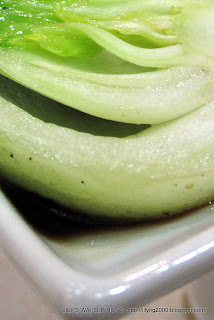 Serve the pork with blanched shanghai bok choy.
Drizzle the sauce over the pork and sprinkle with sesame oil before serving. 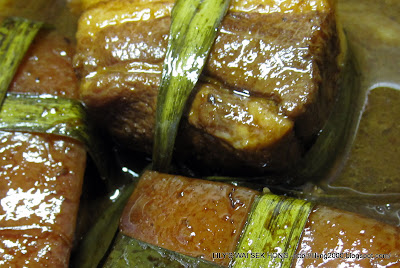 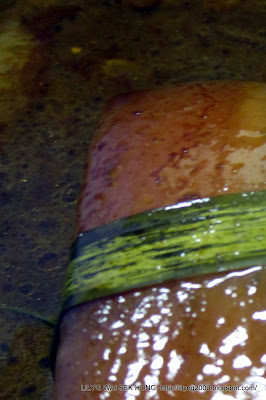 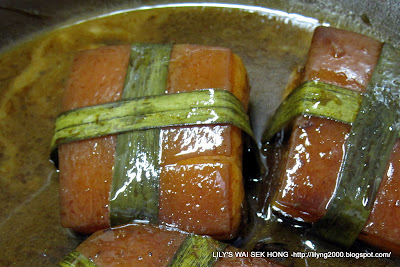 Shiok la....we called it Kong Bak Pau....
wrapped in plain bun and shiok when dipped in the braised sauce fm the meat...

Oh wow...that's fat belly pork. I don't think I can find such fat ones here. It's nice to eat in this cold weather :D

This looks very authentic!! I still use your Mui Choy Pork recipe! I have to try this one.
Thanks Lily!

Been looking for this for awhile. If you don't mind, would you explained a bit more on "gravy separator" and "banana leave strips"?
What are the substitute available if one does not have the separator? Which part of the banana leave to use for the strip? (simply just cut the banana leave into long strings)

a gravy separator is like a measuring cup which has a special feature where oil will float on the top so that the gravy or soup can be poured without the oil.

yes, just tear the banana leaves into strips following the grain of the leaves.

Made this this weekend. Everyone in the family loves it! thanks Lily! ^^

Belly pork is the cut for this dish for it's texture but you can use ribs, the taste will be just as good but the texture is not the same. You can cook 15 - 20 minutes after the 15lb pressure is achieved. Remove lid when pressure is released, cook until sauce is thickened.